It was celebration galore as the family of WO2 Samuel Olawumi (Rtd.) hosted friends and well-wishers during the celebration of his 70th birthday recently. It was a dream come true for the entire family, relations and sons-in-law of Pa Olawumi who organised a special birthday party for him. The flamboyant party which took place at Ikorodu, Lagos at the palatial residence of Mr and Mrs Friday Ayokunle Oyidi (son-in-law) was witnessed by all the children and some grandchildren of the celebrant. It was a well attended occasion. 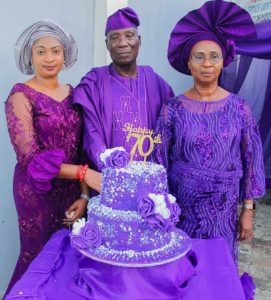 Pa. Olawumi gave God all the glory for His kindness, grace and protection.
The Iyara born former Air Force Officer was grateful to every attendee especially his highly elated children and sons-in-law who gave him a huge surprise with the lavish party put in place to honour him.
Some of the attendees described Pa. Samuel Olawumi as very friendly, dedicated, honest and amiable personality they wish him well in all his endeavours.
A prominent Cultural Ambassador and a media guru, Ambassador Kemi Olawumi, one of the children of the chief celebrant described her father as a strong pillar in her life and she prayed that God will continue to keep him alive for many years to come.

Use FOIA to Play your roles, NOA Boss charges Traditional Rulers in Kogi

SPEECH BY HIS EXCELLENCY, MUHAMMADU BUHARI, PRESIDENT AND COMMANDER IN CHIEF OF THE ARMED FORCES FEDERAL REPUBLIC OF NIGERIA ON THE OCCASION OF COMMEMORATION AND CELEBRATION OF DEMOCRACY DAY ON 12TH JUNE, 2021

Get The Latest News in Your Inbox